Who were the Mongols?

Around 500 BCE, a tribe of nomadic people called the Mongols lived in Asia. The Mongols were traders and herdsmen. They herded sheep and traded horses with the ancient Chinese and Persians.

In the summer, they moved with their herds across the vast steppes of Asia, seeking fresh pasture land. They used dogs to help them herd the cattle. Archaeologists have found rock paintings that show nomads and dogs protecting their sheep.

The ancient Mongols are sometimes called The Felt Tent People because their homes were round tents made of felt.

How did they live?

They did not live in towns. The Mongols were nomads. They traveled in small groups composed of perhaps only two or three families. You might travel 20 miles before you ran into another family group.

They used camels and oxen and carts to travel.

Their homes, called yurts, were odd looking, portable, and very comfortable. These people received their nickname - the felt tent people - from their unusual homes.

Their clothing was very colorful, and their food just the opposite - they are famous for white food and salty tea.

Although the Mongols were nomads, they still had a royalty of sorts - chieftains, and later khans. These were the leaders of various tribes. In ancient times, a tribe did not necessarily travel together. But they did get together at festivals, and in times of need.

From a very early age, kids were taught to respect their parents. They were taught survival skills - how to collect dry animal dung for firewood, how to milk cattle, how to use a bow and arrow, and how to cook and sew. 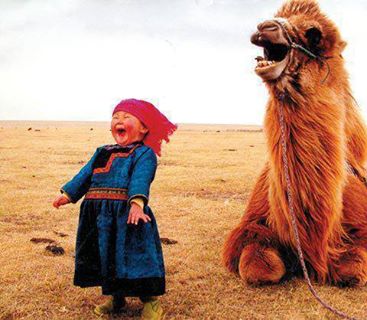 The most important things Mongol parents taught their children had to do with behavior. Everything they did, including the toys they gave their children, and the stories they told, were designed to teach their children to be ethical, honest, and skilled - to have good behavior.

The Mongols for Kids Index